Le Mouton is situated in Port de Vallée, a tiny hamlet near Angers. It is a “longère” in French. The oldest part is a tower built in the 17th century. It used to be an inn and a toll house for the river traffic on the Loire. The tower is now the grand suite, with a large bathroom and shower on the 1st floor.  A century later the current living room and kitchen were added. During the 20th century another extension was added which is now “Le Mouton Noir”.  The bedrooms: “Le Mouton Rouge” and “Le Mouton Bleu” are located on the first floor above the living room and kitchen. “Le Mouton d’Or” is situated in the annex building next to the terrace, along with a large community room for our guests. A very large terrace is at the front of the house. Breakfast and dinner are served here. There are very comfortable lounge chairs and sets with a lovely view at the jacuzzi, the swimming pool and the jeu de boules court.  Garden lounge chairs are scattered in the garden surrounded by several rose bushes. Reading a book in the peaceful surroundings will be a delight! 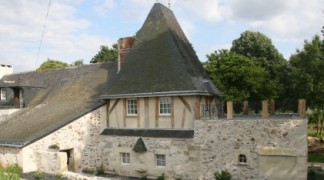 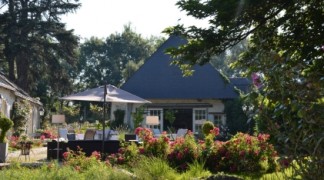